I might have mentioned that I really like 16″ dolls. I looked at the two of them on my birthday, but decided I couldn’t afford $80 worth of dolls that day. A week or so later I was still thinking about them, and had gotten some gift monies, so I went back to the store, but only found Elsa. After several weeks, there are still tons of Elsas, with no Annas in sight.

After scouring the Disney parks, and still finding no sign of Anna, I knew it was time to brave eBay. Now, you know I hate the scalpers with a fiery passion for sucking all the joy out of toy collecting. It’s one thing when you’re selling something legitimately old and/or rare, but this business of brand new toys flying off shelves, available nowhere but eBay at inflated prices–that just makes me crazy.

I bid on an open box Anna, waited days for the auction to be over, watched it count down to the end, and was bid-sniped in the last minute–no doubt by a bid-sniping service. I loathe those as well, which is why I only do Buy It Now on eBay. So much for making an exception. Not doing that again. Grrr.

Anyway, I was able to find this one from a sell who actually charged the retail price. Because sales tax is so high where I live, even after I paid the shipping, I still paid a dollar or two less than I would have had I just gotten her here in the first place. So yay for that.

Elsa is very happy to have her sister home, and hopefully will now stop glaring at me.

I wish I had bought more of the 16″ princesses when they were available. The main reason I didn’t (other than Disney collectibles always disappearing and being painful and expensive to track down) was because they sing. I don’t think dolls should make noise. Silence is one of their best qualities. Another reason is that they don’t make princes in this size, and that’s kind of sad. Dollies need love too.

If I had to choose just one, I probably would have gotten Anna, because Elsa’s blue hands freak me out. (Two by two, hands of blue…) That’s going to look weird if I ever get around to making clothes for them. So I was happy to get Anna, who would make a better model. Or so I thought. Surprise! This is what I discovered when I took her clothes off. When she sings, her heart glows. For some reason, that necessitates her entire torso being blue. So that off-the-shoulder gown from the coronation? Not really working. What are you thinking??

Lastly, I lined them up with some 16″ fashion dolls so you could compare. From left to right: Alex by Madame Alexander, Ellowyne by Tonner/Wilde Imagination, Tyler (Shauna) by Tonner, Anna by Disney, Elsa by Disney, Gene by Odom 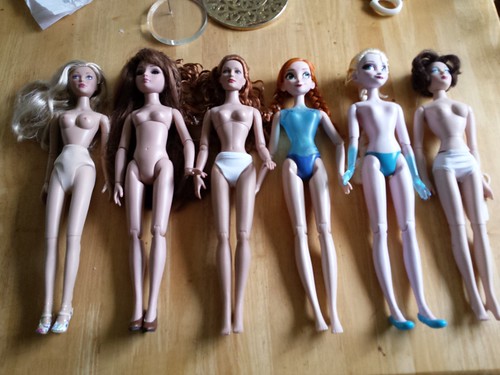 3 Responses to Frozen Anna and Elsa 16″