Since I’ve been on the Barbie trip this week, I thought I’d share some body comparison photos, including the one that was part of the reason I gave up sewing for Barbie. FYI, when I throw out years for these, I’m not talking about the year that particular doll was produced, but the year stamped on the back of the body. 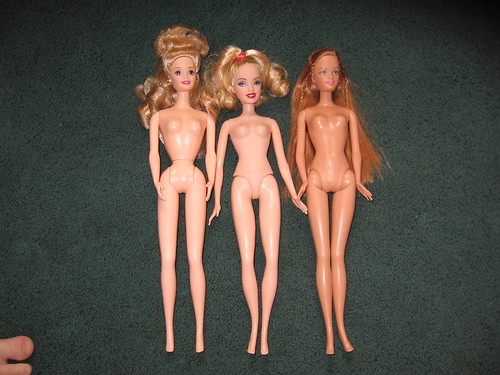 Photo-bombed by my daughter’s toes, here are, left to right, Sugar Plum Fairy with 1966 twist n’ turn body, a random pink box doll on a 2006 body, and Midge with a 1999 belly button body.

So this is what did it. When I opened my Etsy shop in 2007, I started with Barbie clothes. Making money sewing for Barbie was my childhood dream, after all. I do have a problem with being obsessive about fit. The switch to the belly button body threw me. I think I would have been okay with that had they stuck with it, especially because I really do like it and it’s easier to fit. That pinched in waist on the twist n’ turn (and on Blythe), makes things like sheath dresses difficult. At that point, at least it was fairly easy to tell when they were using the twist n’ turn vs. the belly button just by looking at the doll in the box.

But then I wanted a model with red lipstick, so I picked up this girl in the middle. Look how much smaller she is! After an entire childhood with one body, I couldn’t cope with the idea that we were just going to keep changing sizes. The clothes I was making that looked good on both the 1966 and 1999 bodies did not look as good on the 2006 body. When buying other dolls during these period, it was impossible to know if it was going to be on the 1999 or the 2006 body. Even in 2008, I bought one from the Fashion Fever line and the body was the 1999. The whole thing just ticked me off, and I hated the idea of selling something and having it not look great on their doll.

I don’t think I have any photos of the Fashionista I got a few years ago, just to have a more recent, classic Barbie on my shelf again. I was so uninterested in sewing for them, I didn’t even compare her to the older ones. She’s on a 2009 body.

As far as I can tell, despite the differences in articulation, these dolls are the same size. So…does that mean Barbie’s size has been stable for the last 5 years? Maybe it’s time to start sewing for Barbie again.

Author of the Talent Chronicles superhero romance series, and owner of Dolly Delicacies sewing patterns for dolls.
View all posts by Susan Bischoff →
This entry was posted in Collecting, Dolly Information and tagged barbie, comparisons, sizing. Bookmark the permalink.